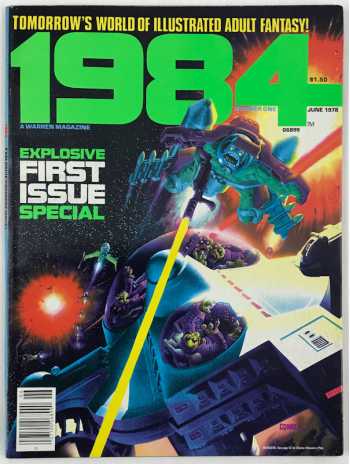 An unread warehouse find of the first issue. 1984 was the last major title to come from Warren Publishing (Creepy, Eerie, Vampirella). Launched to compete with Heavy Metal magazine which debuted the year before, this black & white, edited by Bill Dubay, notoriously featured gratuitous nudity and foul language.

With ten stories behind a Richard Corben cover. The back cover is a house ad for the second issue of 1984 with another great Richard Corben painting of a girl strapped to a rocket.

Ahhh, what can you say about 1984? Put into the publishing pipeline when Jim Warren apparently panicked over the successful debut of Heavy Metal in 1977, this single magazine set out to pretty much confirm every parent, feminist, African-American, Native American, liberal, conservative, and just plain ol American Joe or Janes worst fears about comics. Juvenile, sleazy, scatalogical, racist, demeaning to women, heavy handed in its treatment of violence and lame in its sense of humorall aptly describe 1984. Let me put it this way, Howard Stern would LOVE this magazine. And thats just the stories. Behind the scenes, DuBay apparently rewrote other writers stories to make them even more sleazy than they originally were. Buying an issue of 1984 in 1978-1982 gave one about the same feeling as buying a Hustler. You might like comics, you might like skin magazines, but liking these two magazines was admitting that maybe you were a little bit of a sleazy dumbass too. Even today, I cringe a little, just knowing a complete set of 1984/1994 is stored in my closet. However, in its defense, 1984 published the best art {often quite spectacular art} of any Warren magazine during its run and DID publish some pretty decent stories. Now, as to this issue in particular, when you lead off with a story about collecting semen, the reader might get a negative idea of where the issue was going to go. That negative idea would be pretty much right on target, but there are some definite hightlights here. Rich Corben's Mutant World' starts off a serial that any adult {not porn, but adultthere's a difference} magazine in 1978 would have been proud to publish. Nicola Cuti managed to write a couple of worthwhile stories, even as they were nearly buried in silly sex antics. Jim Stenstrum delivered the best story of the bunch, a charming, silly, and adult story that managed to lightly tapdance its way past the open sewer that many of the other stories leaped into somewhat cheerfully. The artwork was very good, with Maroto, Corben, Nino & Bermejo providing great jobs.

Near Fine (mild storage wear to the edges, age toning along the edges, otherwise no dents or dings, flat, tight, clean)