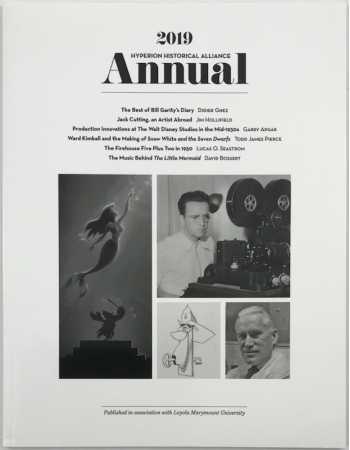 The Hyperion Historical Alliance (HHA)'s inaugural 2019 annual offers in-depth articles on Disney history-related subjects authored by members of this professional association, including: "The Best of Bill Garity's Diary," an exploration of technological revolutions, union troubles, and the building of Disney's Burbank Studio; "One of Walt's - and Roy's - Boys," a look at the career of Jack Cutting, an early Disney artist who later led the company's Foreign Department following his contributions as a member of the famed El Grupo trip to South America; '"Initial" Thoughts on Production Innovations at The Walt Disney Studios in the Mid-1930s," insights into early Disney animation production processes; "Wow, We've Got Something Here: Ward Kimball and the Making of Snow White and the Seven Dwarfs," a take on the early animation contributions of famed animator Ward Kimball to Disney's 1937 animated classic; "A Cinderella Story: The Firehouse Five Plus Two in 1950s," examining a pivotal year in the history of the noted seven-piece jazz band made up of Disney creative personnel; and "A Look at the Music Behind Disney's The Little Mermaid," chronicling history behind the musical success of the 1989 animated masterpiece.