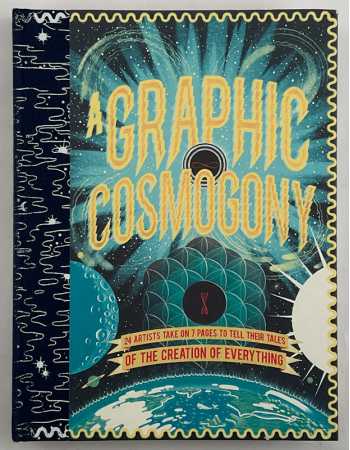 The introduction by Paul Gravett:

"When it comes to the birth of comics, like the birth of the cosmos, it's still open to speculation. The Book of Genesis might open with ‘In the beginning was the word', but it seems more than likely that ‘In the beginning was the picture'. Or at least a picture which served as a word, a visual vehicle for representation and meaning. Mankind surely drew before we could write, but why make a distinction anyway? After all, the Chinese use the same word to mean both writing and drawing. And we know that many letter or word forms began as codified shorthand drawings of what they represented. We can only guess what the very first drawings looked like on the rocky walls of our very first art galleries, cinemas, decorated temples or stained-glass-windowed cathedrals, namely our earliest ancestors' cosy, craggy caves. Most probably they included a life-size hand, daubed, smacked and printed straight onto the rock, and perhaps a simplified version of man himself, reduced to a symbolic, talismanic stick figure, the proto-cartoon or ur-comic.

"There is something instinctual, almost primal about making and reading/viewing comics, especially highly graphic ones with few or no words. They spark a provocative clarity that taps into our inner caveman's brain, our pre-literate child-self deciphering to make sense of the strange wonders of the everyday. And for all our scientific advances, here we are now, only a mere decade into this second millennium, and still finding fascination in the show-and-tell choreographies of pictures, lettering, balloons, captions and panels. So what better means than comics, the distillation of illuminated manuscripts, tapestries, meditational paintings and decorated scrolls and all of humanities' narrative arts, to tell that oldest story of them all, the story of creation?

"The Biblical creation myth proposes that God created the world in seven days, or six plus one day off to chill out, so in that spirit the two-dozen cartoonist-shamans corralled into this compendium were given just seven pages to devise their own version of how we all got here. Some draw on tales from ancient traditions, such as Norse or Ainu legends or a universal mother's womb of all things. Some illustrate mainly in stylised profiles, harking back to Egyptian tomb walls or Grecian friezes. Others mostly ignore previous versions – ‘It's been done to death. You have to make it up' -- and take more oblique or satirical stabs. They try explaining the origins of everything as a magician's act, a simulation game, a failed school assignment, a yurt-dweller's break from boredom, the tears of a grief-stricken stag or the contents of a cyclops' vacuum-cleaner bag or the head of Derek. It's up to you whether you believe such ‘dubious facts' as ‘ghost energy', ‘ether-juice' or the heresies of the ‘Masters of the Universe'. Entire world faiths have been built on equally unlikely accounts. Perhaps if enough readers of this volume start believing in certain stories, they might cause a spate of new religions to spring up based upon them.

About the press: "Nobrow Press endeavors to push the boundaries of the offset printing process to ensure that colour, format and paper quality combine to produce publications that are not just books, but collectible art objects. Many of our publications are run in editions of between 3000 and 5000 copies, our unique system of printing full spot colour publications gives our books the luxuriant quality of artists' books"