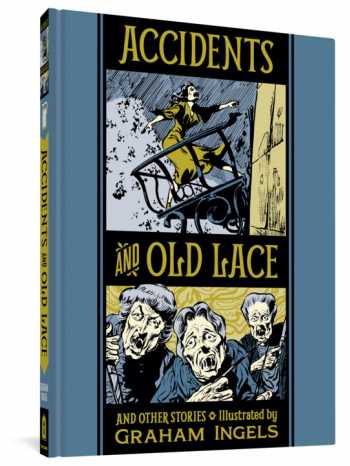 These stories, which "Ghastly" Graham Ingels drew while he was at the pinnacle of his powers, include tales such as "Accidents and Old Lace." Three sweet, little old ladies weave tapestries depicting the gruesome deaths of real people, but when an art dealer commits murder to get a tapestry of his own, he discovers just how closely art imitates ... death. In "Marriage Vow," a woman returns from the grave to fulfill her wifely duty to her murderous husband, until death does them ... together; and in "The Sliceman Cometh," an executioner during the French Revolution can't escape the severed head of an innocent man.

Graham Ingels (1915-1991, b. Cincinnati, Ohio), began working for EC Comics, drawing Western, romance, and crime stories, in 1948. But it was with the advent of EC's horror titles that "Ghastly" Graham Ingels's detailed work perfectly evoked the proper mood for the kind of wickedly macabre stories EC excelled at, and it made him a fan favorite. Ingels drew the lead feature for every issue of Haunt of Fear starting with #4, but his work, "hosted" by his signature character, the Old Witch, appeared regularly in all three EC horror titles and in Crime SuspenStories. In 1989, Ingels returned briefly to the comics landscape when he created a series of oil paintings featuring the Old Witch.