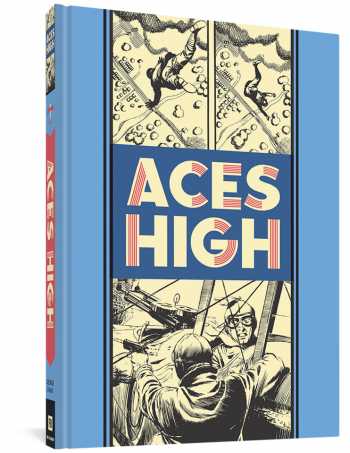 George Evans was a master of the aviation war story. This collection includes all of his highly-acclaimed stories for Aces High, EC's famous air war title. As a bonus, we present a rarity: Evans' never-before-reprinted 3-D story of World War I ace Frank Luke (in regular, easy-on-the-eyes 2-D). This volume also includes numerous Evans crime and shock stories, including "As Ye Sow...," "...My Brother's Keeper," and "Cadillac Fever." Other war stories, many done in collaboration with Harvey Kurtzman, include "Napoleon!" and "Flaming Coffins" (which Evans wrote, about the inherent perils of WW I aircraft). Like all books in the Fantagraphics EC line, Aces High features essays and notes by EC experts on these superbly crafted, classic comic book masterpieces.

George Evans (1920-2001) worked as a World War II aircraft mechanic, which informed his depiction of all kinds of airplanes in breathtaking aerial acrobatics. He was the regular artist on the newspaper strip Secret Agent Corrigan (a.k.a. Secret Agent X-9) from 1980 until his retirement in 1996.

In addition to his pioneering work on the "serious" EC war comics, Harvey Kurtzman (1924-1993) created the all-time greatest satirical comic (with Mad), the most widely-read adult comic strip (with "Little Annie Fanny" in Playboy), and one of the earliest graphic novels (with the 1959 The Jungle Book).