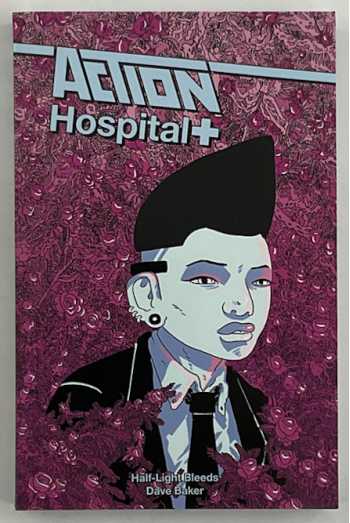 Action Hospital: Half-Light Bleeds continues the exciting adventures of Joan, Doyle, and all of your favorite Action Hospital Characters. Volume two has over 300 pages of goodness including additional pin-ups by Andrew MacLean, Jim Mahfood, and countless other artists!

Action Hospital: Half-Light Bleeds is the story of Joan Michelle Basquiat as she attempts to defend the eponymous Action Hospital against cave-dudes from the distant past, time traveling gondolier-themed assassins, a human-shark clone of Abraham Lincoln, and a demon with 9 and 3/4th heads.

Action Hospital is written and drawn by Dave Baker.

Dave Baker, originally from the drug-infested wasteland that is Arizona, lives in Los Angeles. He has a degree in Visual Communications with an emphasis in Illustration. Logically, he makes a living as a writer. Dave has written comic books and 'the' moving pictures. Dave also enjoys talking about himself in the third person, playing air guitar, and taking long walks around his studio apartment.