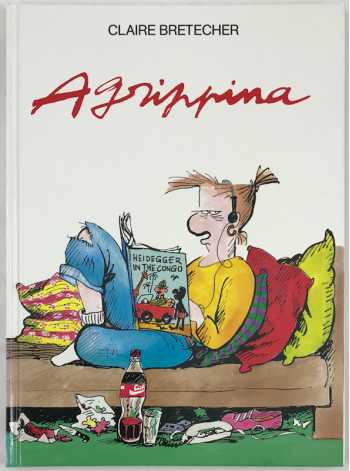 This is a translation of the Claire Bretécher's bestselling comic strip series Agrippine. Translated from the French by Fiona Cleland.

Most of Bretécher's output after 1988 was devoted to this one character, the rebellious adolescent 'Agrippine' (1988-2009). The reader follows Agrippine at the top of her teenage crisis, struggling with existential dillemas and curiosities. She is the typical spoiled teenager, who cannot be bothered with future plans, but instead is angry with everyone and everything. She resents her parents for not divorcing when she was a child, and is annoyed with her baby brother and his "pee-poo" humor. Again, Bretécher offered observations of the generation gap between babyboom parents and the bored-out and spoiled teenagers of the 1990s.

[In 2001, Bretécher's series Agrippine was adapted into a 26-episode TV series by Canal+.]