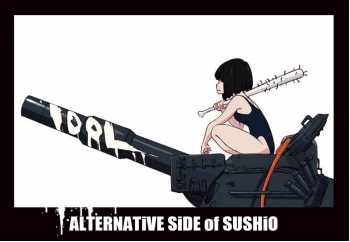 Toshio Ishizaki, also known as Sushio, is a Japanese animator, animation director, and illustrator, a part of Studio Trigger. A former member of Studio Gainax, he's primarily known as the character designer of Kill La Kill, as well as an animator for Tengen Toppa Gurren Lagann, FLCL, and Kill Bill.

Sushio is arguably best known for his character design and animation work on classic anime like Gurren Lagann and Kill La Kill. In fact, he's one of the biggest names associated with the Studio TRIGGER family. However, he does a lot of freelance and music-based illustrations as well. This new collection collects a whopping 304 pages of illustrations he"s made over the years based on the WACK/BiS/BiSH extended idol family which also includes groups like Gang Parade. Whether you"re in it for the Anti-Idol culture or really appreciate Sushio"s illustrative talents, you"re not going to want to miss this.