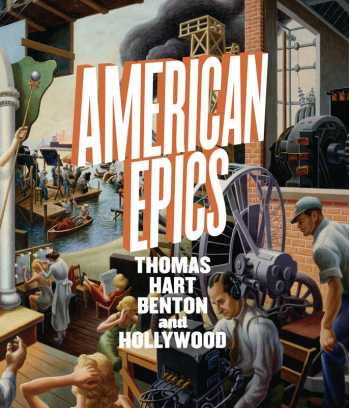 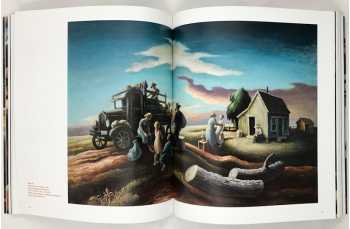 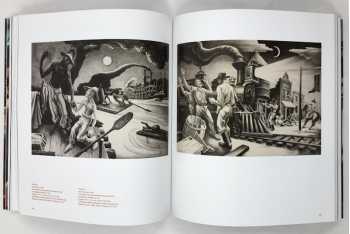 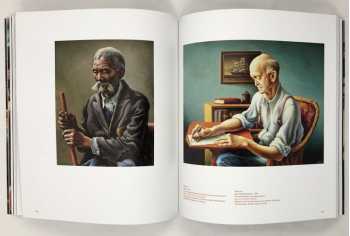 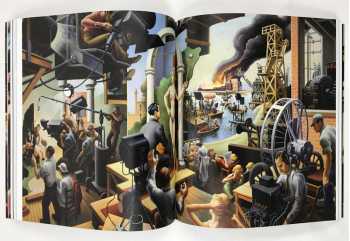 A wonderful catalog for American Regionalist painter Thomas Hart Benton. Once upon a time, Hollywood movie studios would commission famous artists to create artwork for a film, for key art or for a magazine feature; artists such as Norman Rockwell, Al Hirschfeld, ... and Thomas Hart Benton.

Everything in the fluid, vivid murals that made [Thomas Hart Benton] famous seems to be pulsing or coursing. His pictures were, in a sense, motion pictures, which may be why, in 1937, Life magazine commissioned him to go to Hollywood to create a "movie mural" that would bring its readers closer to the heart of the still-newish mystery of how films were created...

The eye for caught-on-the-fly humanity he brought to that assignment, including the wonderfully swift incidental sketches he made on Life's dime a chorine applying makeup, a posturally tortured screenwriter working something through, a story conference in a diner booth forms the heart of this catalogue raisonné of his Hollywood-influenced work. With copious reproductions and essays by a dozen contributors and the editor, Austen Barron Bailly, "American Epics" is an appealing combination of coffee-table art book and dinner-table argument. Its approach is exploratory and reiterative rather than chronological...

This generously illustrated book explores the connections between Thomas Hart Benton's art and Hollywood movies from groundbreaking perspectives. Thomas Hart Benton was a thoroughly American artist. His regionally focused paintings and murals depicted everyday American life as well as the country's history. This volume focuses on one of the most American of Benton's associations: Hollywood. Not only did Benton create commissioned murals and portraits of film stars and movies, but he also developed a style that was highly theatrical and narrative. This volume is the first to collect all the works conceived by Benton for the film industry. It includes related ephemera, photographs, and documents of Benton at work, along with a series of thought-provoking essays that explore a diverse array of topics from Benton's engagement with American identity from the 1920s to the 1960s, to parallels between Benton's use of Old Master methods and film production techniques. Fans of Thomas Hart Benton will find surprising insights into his career, while those fascinated by Hollywood history will discover how one of America's most revered artists shaped and was in turn influenced by the film industry.