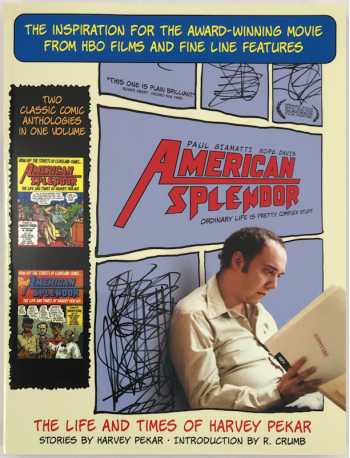 Two classic comic anthologies in one volume. Out of print in all versions.

American Splendor is the world's first literary comic book. Cleveland native Harvey Pekar is a true American original. A V.A. hospital file clerk and comic book writer, Harvey chronicles the ordinary and mundane in stories both funny and touching. His dead-on eye for the frustrations and minutiae of the workaday world mix in a delicate balance with his insight into personal relationships. Pekar has been compared to Dreiser, Dostoevsky, and Lenny Bruce. But he is truly more than all of them--he is himself.

Harvey Pekar, a native of Cleveland, was best known for his autobiographical slice-of-life comic book series American Splendor, a first-person account of his downtrodden life. He was also a jazz critic whose reviews were published in the Boston Herald, the Austin Chronicle, and Jazz Times. He did freelance work for the critically acclaimed radio station WKSU and appeared many times on Late Night with David Letterman.

Very Fine
Inscribed by the artis