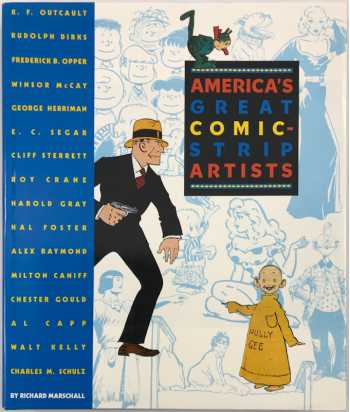 A treasury of outstanding graphics and rare and beautiful comic art, this book is also a history of the art form itself, as seen through the work of 16 of the finest cartoonists of the last century, including Al Capp, Charles M. Schulz, Walt Kelly and Chester Gould. Marschall's fascinating text portrays the life and times of these artists, demonstrating their influence on American art and society. 250 illustrations, many in full-color.

A swiftly paced and engrossing survey of the lives and careers of the most influential and original creators of comic strips, ranging across the hundred-year history of the genre. Marschall, the editor of Hogan's Alley: The Journal of the Cartoon Arts, brings an extraordinary fund of knowledge to the project and a refreshingly sharp, frank critical sense. Beginning with R.F. Outcault, the creator in the late 19th century of the phenomenally popular Yellow Kid and Hogan's Alley, and concluding with Charles Schultz and the ubiquitous Peanuts strip, these profiles offer a nice blend of the biographical and the critical. Indeed, Marschall's pieces on such diverse figures as George Herriman (the shy genius who created Krazy Kat) and Al Capp (Lil' Abner) are superb introductions to the artists and their creations, and the most succinct and convincing evaluations of their work available. E.C. Segar (Popeye), Harold Gray (Little Orphan Annie), Hal Foster (Prince Valiant), Milton Caniff (Terry and the Pirate), and Walt Kelly (Pogo) are among those profiled.

Near Fine in Near Fine dustjacket