Sign in | Register
HomeNew ArrivalsAndru + Esposito: Partners for Life (Near Fine)
Save 17% 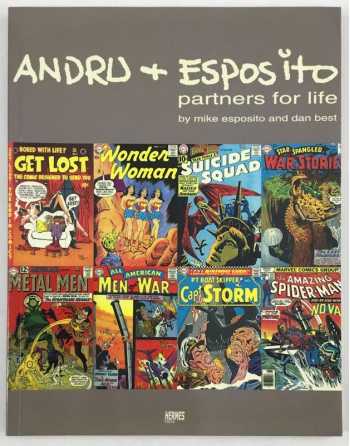 This title is sold out in all versions!

Penciler Ross Andru and inker Mike Esposito were one of the most famous, prolific, and talented artistic teams to flourish during the Silver Age of comics. Whether working as publishers of their own work during the 1950s or at DC Comics on such strips as Wonder Woman,Suicide Squad, Metal Men, and Flash, on numerous war strips, or on DC's flagship character, Superman, their work is fondly remembered today by fans and comic book historians. In the 1970s both artists lent their talents to Marvel's titles and continued to turn in inspiring work for DC.

Andru & Esposito: Partners for Life chronicles the careers of both artists and is packed with hundreds of illustrations, many from original artwork, spanning both artists' careers. The book also contains mountains of never seen unpublished material, an authoritative text by Esposito and comic book historian Dan Best, remembrances and tributes by noted collaborators and industry professionals including Gene Colan, Mark Evanier, Dick Giordano, Stan Goldberg, Gil Kane, and Alex Toth. The book concludes with a detailed checklist.