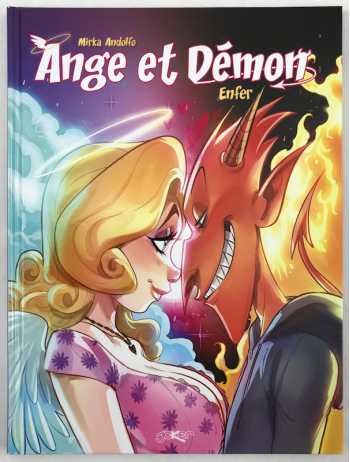 This French edition is two and a half inches taller and wider than the comic book sized American edition. A 48-page graphic novel by Mirka Andolfo, a female cartoonist in Italy. Lots of cheesecake and cartoony nudity.

Angela and Damon are living proof that opposites attract: she is beautiful and pure as an angel, he is ugly and deceitful like the devil. And yet, they love each other! Angela wants to remain a virgin until marriage. Damon has only one thing on his mind: to deflower her before her time. Failure after failure, how will the horned demon resist the charms of the angel-winged beauty? Misunderstandings and coitus interruptus are on the menu of this first volume of the extraordinary adventures of the two most platonic lovers in comics.

Her creator owned series Unnatural (originally published by Panini Comics in Italy) is published in many countries (including Germany, France, Poland, Spain, Mexico) and, in the United States, by Image Comics.

As a creator, her first book, Sacro/Profano (originally published in Italy) is published in France, Belgium, Netherlands, Spain, Germany and Serbia.