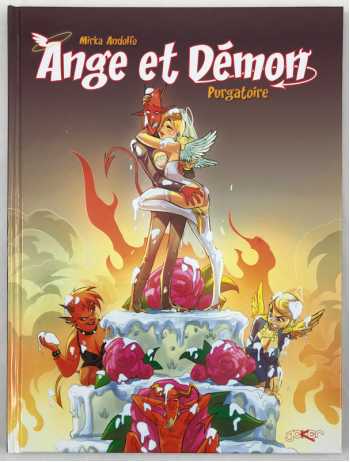 This French edition is two and a half inches taller and wider than the comic book sized American edition. A 48-page graphic novel by Mirka Andolfo, a female cartoonist in Italy. Lots of cheesecake and cartoony nudity.

Angelique and Damon are living proof that opposites attract: she is beautiful and pure as an angel, he is ugly and deceitful like the devil. And yet, they love each other!

Since his marriage proposal, Damon's relationship with Angelique has taken a new turn. After giving him her heart, the beauty with angel wings finally offers him everything that goes with it. The devil with the forked tail would be at the height of enjoyment if it weren't for their respective families and friends. As the wedding approaches, the two lovers must deal with the austerity of some and the eccentricity of others. For Damon, for sure, the path to the altar will be a long purgatory.

Her creator owned series Unnatural (originally published by Panini Comics in Italy) is published in many countries (including Germany, France, Poland, Spain, Mexico) and, in the United States, by Image Comics.

As a creator, her first book, Sacro/Profano (originally published in Italy) is published in France, Belgium, Netherlands, Spain, Germany and Serbia.