Sign in | Register
HomeNew ArrivalsAnimation: A World History
Save 27% 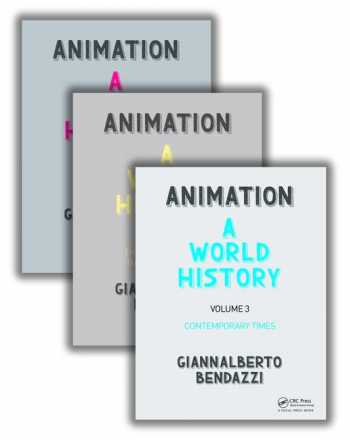 A continuation of 1994"s groundbreaking Cartoons, Giannalberto Bendazzi"s three-volume Animation: A World History is the largest, deepest, most comprehensive text of its kind, based on the idea that animation is an art form that deserves its own place in scholarship. Bendazzi delves beyond just Disney, offering readers glimpses into the animation of Russia, Africa, Latin America, and other often-neglected areas and introducing over fifty previously undiscovered artists. Full of first-hand, never before investigated, and elsewhere unavailable information, Animation: A World History encompasses the history of animation production on every continent over the span of three centuries.

Over 200 high quality head shots and film stills to add visual reference to your research.
Detailed information on hundreds of never-before researched animators and films.
Coverage of animation from more than 90 countries and every major region of the world.
Chronological and geographical organization for quick access to the information you"re looking for.

Volume I traces the roots and predecessors of modern animation, the history behind Émile Cohl's Fantasmagorie, and twenty years of silent animated films. Encompassing the formative years of the art form through its Golden Age, this book accounts for animation history through 1950 and covers everything from well-known classics like Steamboat Willie to animation in Egypt and Nazi Germany.

Volume II delves into the decades following the Golden Age, an uncertain time when television series were overshadowing feature films, art was heavily influenced by the Cold War, and new technologies began to emerge that threatened the traditional methods of animation. Take part in the turmoil of the 1950s through 90s as American animation began to lose its momentum and the advent of television created a global interest in the art form.

Volume III catches you up to speed on the state of animation from 1991 to present. Although characterized by such trends as economic globalization, the expansion of television series, emerging markets in countries like China and India, and the consolidation of elitist auteur animation, the story of contemporary animation is still open to interpretation. With an abundance of first-hand research and topics ranging from Nickelodeon and Pixar to modern Estonian animation, this book is the most complete record of modern animation on the market.

A former professor at the Nanyang Technological University of Singapore and the Università degli Studi of Milan, Italian-born Giannalberto Bendazzi has been thoroughly investigating the history of animation for more than forty years. A founding member of the Society for Animation Studies, he authored or edited various classics in various languages, and has lectured extensively on every continent.