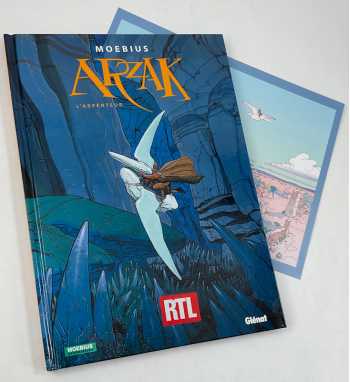 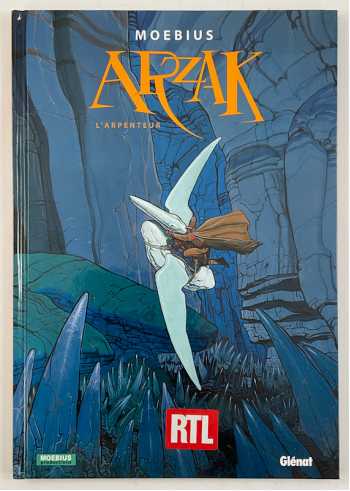 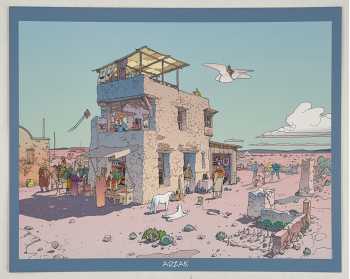 This is a sharp first printing with a special 9 x 12 color exlibris (bookplate) from Moebius' Stardom shop in Paris. Out of print.

This was the last Moebius book to be published before his death. A 64-page graphic novel written, illustrated and colored entirely by the master himself. A full-length story featuring all the elements we expect from classic Moebius: exotic vistas, desert landscapes, worn-in spacecraft and hardware, alien creatures and towns, and sudden bloody violence. Plus 16 pages of watercolors, sketches, and a cast of characters. All in an oversize 10x14 inch album format.

"We only know his face burned by the desert winds, his cloak and his cone-shaped hat. We know he rides a strange white bird. Together they fly over a doomed world, bleak and barren. They cross the remnants of a sunken civilization. They go through absurd situations, struggling with fauna and flora by turns funny, disturbing and deadly.

Now Moebius returns to this mysterious hero. Plunging him into adventures that show the reader the origin of the secrets of the world in which he operates.

"L'Arpenteur (The Surveyor) is the first volume of three.

"The first takes us into deep space where a ship of the Confederacy Dessmez Kimorg Barbax is attacked by a dreaded pirate.

"The second takes place on Tassili, the home planet of Werge. The former ruling race has been conquered by the irresistible advance of the confederation in its Dessmez human conquest of the galaxy. Tassili, ruined, deserted and abandoned by all, is populated by a meager, slowly dying human colony.

"Arzak's mission is to survey the endless chaotic territory in order to track down the anomalies and ensure the human order. It is in fulfilling this mission, he discovers vile trafficking perpetrated against Werg survivors. Arzak will pass through hardships and dangers, discover the secrets of Tassili and plunge into the depths of the passions of the human soul...

"Arzak's world is now an open book and Arzak is the hero.

"The mythical Arzak left an imprint in the unforgettable world of comics and continues thirty years later, to be read worldwide."