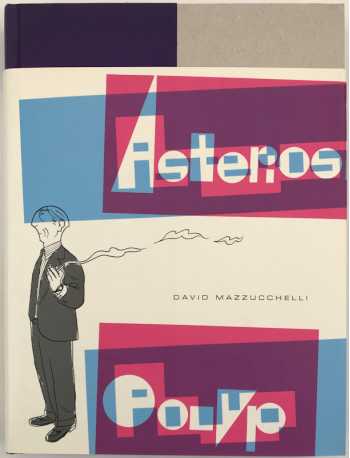 The triumphant return of one of comics' greatest talents, with an engrossing story of one man's search for love, meaning, sanity, and perfect architectural proportions. An epic story long awaited, and well worth the wait.

Meet Asterios Polyp: middle-aged, meagerly successful architect and teacher, aesthete and womanizer, whose life is wholly upended when his New York City apartment goes up in flames. In a tenacious daze, he leaves the city and relocates to a small town in the American heartland. But what is this "escape" really about?

As the story unfolds, moving between the present and the past, we begin to understand this confounding yet fascinating character, and how he's gotten to where he is. And isn't. And we meet Hana: a sweet, smart, first-generation Japanese American artist with whom he had made a blissful life. But now she's gone. Did Asterios do something to drive her away? What has happened to her? Is she even alive? All the questions will be answered, eventually.

In the meantime, we are enthralled by Mazzucchelli's extraordinarily imagined world of brilliantly conceived eccentrics, sharply observed social mores, and deftly depicted asides on everything from design theory to the nature of human perception.

David Mazzucchelli has been making comics his whole life. Known chiefly for his collaborations -- with Frank Miller on seminal Batman and Daredevil stories, and with Paul Karasik on an adaptation of Paul Auster's novel, City of Glass -- he began publishing his own stories in 1991 in his anthology magazine, Rubber Blanket. Since then his short comics have been published in books and magazines around the world. Asterios Polyp is his first graphic novel, and has won the Los Angeles Times Book Prize and been listed as a New York Times notable book.