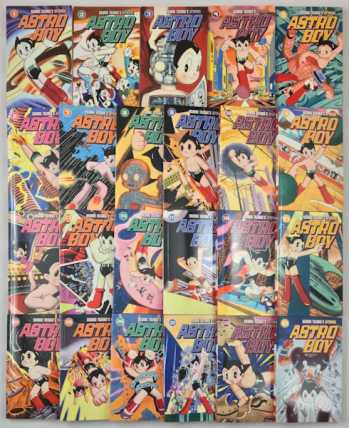 A complete set of first printings of the first American publication of Osamu Tezuka's Astro Boy! Complete in 23 volumes. Over 4,800 pages.

Published for the first time in America!

Dark Horse proudly presents another of the crown jewels of international graphic fiction -- Astro Boy! Created by the late Osamu Tezuka, a revered animator and cartoonist -- who created over 150,000 pages of comics in his career! -- and considered the Walt Disney of Japan, his Astro Boy was the first manga series to be adapted to animation and became a worldwide phenomenon, making Astro Boy the Mickey Mouse of anime -- a jet-powered, super-strong, evil-robot-bashing, alien-invasion-smashing Mickey Mouse, that is! Exciting, whimsical, and touching, Astro Boy hearkens back to the classic era of comics and animation, featuring stories that readers young and old will enjoy. Don't miss the opportunity to experience this landmark series, never before available in America, each volume featuring over 200 pages in an affordable and convenient pocket-sized format as currently collected in Japan!

Published by Dark Horse Comics between 2002 and 2004, this complete twenty-three-volume set is an adaption of the Japanese language Akita Shoten collection. The original Japanese artwork was "flipped" to read left to right in order for the stories to read more smoothly in English. Although the stories are reprinted out of their original publication order, they are published in the order Osamu Tezuka himself chose. Because of this, each volume also contains a short framing sequence written and drawn by Tezuka in order to provide explanations and/or background information.

Translation of the series was provided by noted Astro Boy expert, Frederik L. Schodt, author of The Astro Boy Essays. As the original stories were set in Japan, Schodt believed, for the most part, it was necessary to retain the original Japanese names and locations whenever possible. Notable exceptions to this were, the translation of Shunsaku Bans nickname "Higeoyaji" to "Mr. Mustachio", as well as the use of Astro Boys English name as opposed to his original Japanese name, Tetsuwan Atom. Schodt decided that "Astro" was close enough to "Atom" (another English word), and that it would simply be "going against too much history" to change it. Occasionally some of the Japanese characters' names had a double meaning which was impossible to convey properly in English. Instead of changing the names to match the meaning, especially in the case of some of the more well-known characters, Schodt tried to work the double meaning in elsewhere in the translation. However, when dealing with minor characters with humorous-sounding names, Schodt tried to find equivalent English puns wherever possible.

As with most North American editions of Osamu Tezuka manga, despite some content that could be perceived to be racially insensitive by modern standards, no revisions were made to the original artwork and/or story. Instead a message from Tezuka Productions is included as a foreword explaining the depictions of people from Africa and Southeast Asia are simply a product of their times and that Osamu Tezuka had no intention to discriminate. However, since Tezuka has since passed away, any retro-active edits to his works would violate his right as a creator and "do little" to end racial and ethnic discrimination throughout the world.