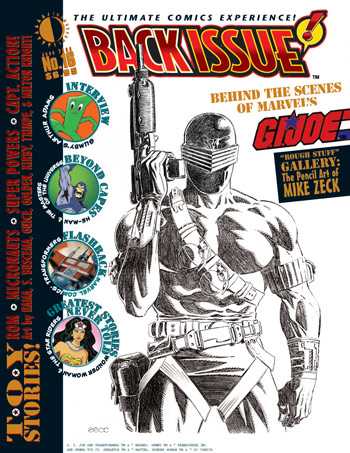 BACK ISSUE #16 celebrates toy-inspired comics of the 1970s and 1980s, headlined by an in-depth look at Marvel's G. I. Joe, featuring interviews with and/or art by LARRY HAMA, DENNY O'NEIL, and HERB TRIMPE! ARTHUR ADAMS bends our ear about drawing Gumby, SAL BUSCEMA and BUTCH GUICE trade tales about Rom and Micronauts in a "Pro2Pro" interview, the pencil art of MIKE ZECK gets the "Rough Stuff" spotlight, and "Greatest Stories Never Told" examines the ill-fated Wonder Woman and the Star Riders toy/animation/comics concept! Plus: DC's Masters of the Universe with GEORGE TUSKA, Marvel's Transformers, a 40th anniversary salute to Captain Action, JACK KIRBY's Super Powers comics, a look at Super-Hero Cars, and an "Off My Chest" guest editorial from cartoonist MILTON KNIGHT! Featuring rare and classic art by these artists, plus MICHAEL GOLDEN and others! With a Snake-Eyes "sketch cover" by MIKE ZECK! Edited by MICHAEL EURY.