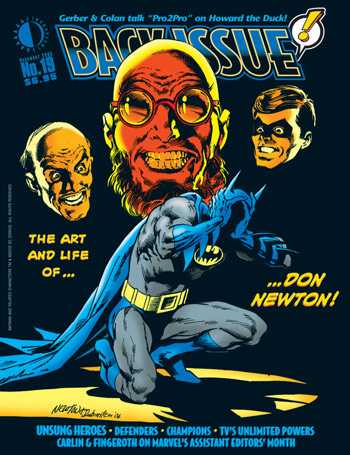 In Back Issue #19, we give credit where credit's due as we salute comics' Unsung Heroes! The career of artist DON NEWTON (Batman, Shazam!, The Phantom) is examined, with classic and unpublished comics and fanzine art. STEVE GERBER and GENE COLAN talk "Pro2Pro" about their Howard the Duck collaboration, while MIKE CARLIN and DANNY FINGEROTH revisit Marvel's Assistant Editors' Month! Also: "Greatest Stories Never Told" looks at both DANNY BILSON and PAUL DeMEO's unrealized Unlimited Powers TV show (starring an older Flash and Green Arrow's daughter) and TONY ISABELLA's aborted plans for The Champions! Plus: a history of the Defenders, a Mark Gruenwald tribute, and an exclusive interview with Richie Rich (?!). Featuring artwork by and commentary from SAL BUSCEMA, STEVE ENGLEHART, JOHN BYRNE, and a gaggle of today's hottest artists in a preview of Image's new Invincible Handbook. With a new Batman cover by DON NEWTON and JOE RUBINSTEIN! Edited by MICHAEL EURY.