Sign in | Register
HomeNew ArrivalsBatman and the Monster Men - Signed 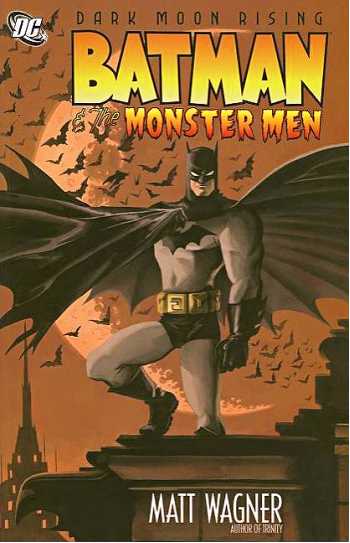 A pristine copy signed by writer & artist Matt Wagner. Out of print.

One year ago, Batman began haunting the streets of Gotham, fighting organized criminals and other miscreants. Now, however, a new, much more horrible, threat has emerged--genetically engineered, mutated men who have developed a taste for human flesh. Does Batman have what it takes to stop them?

Collects Batman and the Monster Men #1-6.

Writer-artist Wagner, best known for his independent-comics creations Grendel and Mage, here updates a pre-Robin Batman adventure, vintage 1940, that portends the crucial change, from mere gangsters to supervillains, in the kind of criminals menacing Gotham City. In it, mad scientist Hugo Strange conducts genetic experiments that transform his victims into gigantic, flesh-eating "monster men." Wagner retains the original's verve and adds modern sophistication with both his simple but powerful art and his compelling storytelling. There's plenty of Batman product on the market, but Wagner's stands far apart from the rest. -- Gordon Flagg