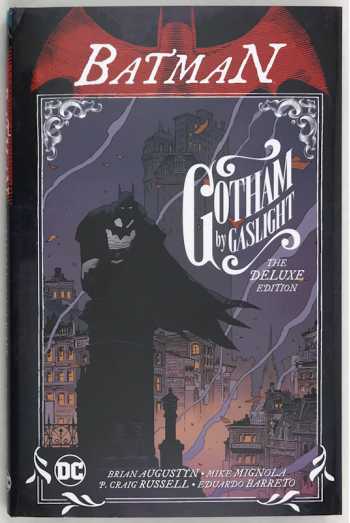 This unread first edition/first printing came directly from Mike's library and is autographed by Mike inside the book.

WHAT WOULD THE GOTHAM CITY OF THE 19TH CENTURY HAVE BEEN LIKE?

In an age of mystery and superstition, how would the people of Gotham react to a weird creature of the night, a bat-garbed vigilante feared by the guilty and the innocent alike?

Some would live in terror. Others would rest easier.

Only one man would take no notice at all...a man with other matters to attend to. His name? No one knows for sure. Most people know him only as Jack.

These are the unforgettable tales that pit the Dark Knight against Jack the Ripper and a death-dealer from the skies over Gotham City! The classic Elseworlds tales Batman: Gotham by Gaslight and Batman: Master of the Future are collected in a new, deluxe edition, also including Convergence: Shazam! #1-2 and Countdown Presents: The Search for Ray Palmer: Gotham by Gaslight #1.

Near Fine in Near Fine dustjacket (bump to the top of the spine, otherwise Very Fin
Signed by Mike Mignola inside the book