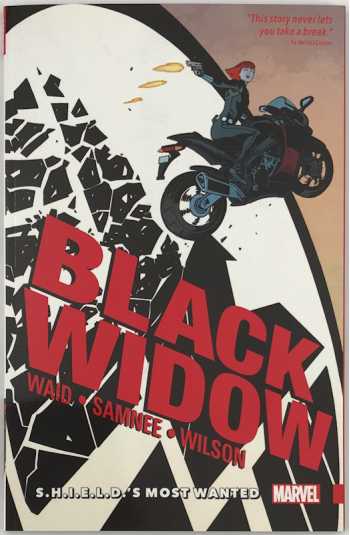 They wowed you with Daredevil, now the Eisner Award-winning team of Mark Waid and Chris Samnee take Black Widow to new heights -by forcing her to go on the lam! Natasha has a lifetime of secrets, and when some of the darkest ones are made public, nobody is safe. As S.H.I.E.L.D. turns on its once greatest asset, she seeks out her own answers in a knockdown drag-out tale of action and espionage! But will the Widow's hunt for the Weeping Lion send her back to the one place she never wanted to go? And, when a S.H.I.E.L.D. funeral makes the assembled top brass an attractive target, it's lucky for them that the Black Widow is still on their side, even if they aren't on hers.

Mark Waid has written a wider variety of well-known characters than any other American comics author, from Superman to the Justice League to Spider-Man to Archie and hundreds of others. His award-winning graphic novel with artist Alex Ross, KINGDOM COME, is one of the best-selling comics of all time.

Chris Samnee is an American comic book artist. He received the 2011 Harvey Award for Most Promising Newcomer for his work on the Thor: The Mighty Avenger, and won a 2013 Eisner Award for Best Penciller/Inker for his work on the The Rocketeer: Cargo of Doom and his Daredevil.He was also nominated for the 2006 Russ Manning Most Promising Newcomer Award.