Sign in | Register
HomeIllustrationContemporary IllustratorsBlack'Mor Chronicles: The Cursed: Welcome to the Park of the Chimeras 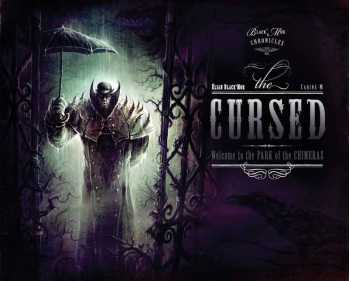 Élian Black'Mor is a writer, illustrator, and graphic designer who chose to disappear behind his penname to better play with the universe that he created alongside his girlfriend, Carine-M. Featuring a vast, Victorian-inspired world, his work is a collection of detailed illustrations and writings produced by a reporter with the supernatural ability to see the invisible.

Carine-M is a creator of imaginary worlds, able to capture the dreams of others. As an author, illustrator, and graphic designer, she enjoys using different modes of expression to bring the extraordinary world in which she works to life. As Élian Black'Mor's co-author, she is his companion on journeys both real and imaginary.

When world traveler and paranormal journalist Élian Black'Mor arrives in London, he discovers a hidden worldthe Park of Illusions, a hidden refuge for werewolves, fauns, hydras, and other mystical creatures. In this stunning collection of his observations, Élian describes his encounters with fascinating supernatural beings of all kinds, from the Master Eel of the Thames to the Plant Sarcophagus of Kew Gardens.

A captivating story presented in a unique format, Black'Mor Chronicles: The Cursed features striking illustrations and immersive text that work in tandem to produce a graphic novel unlike any other. From secret messages hidden in the illustrations to scrapbooked maps and Victorian advertisements, this beautiful book is one meant to be examined over and over again. Imaginative and spectacular, Black'Mor Chronicles: The Cursed will have readers believing that Élian's extraordinary hidden world truly exists.