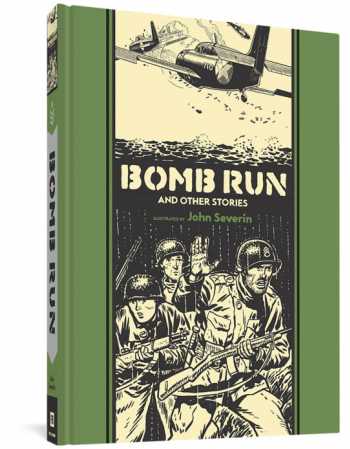 The team of Harvey Kurtzman and John Severin was one of the most fruitful collaborations in the history of comics. The work they did together brings the gritty realism and psychological truth of Stephen Crane and a verisimilitude to the page that it seems as if they are reporting from the scene. Together with inker and friend Will Elder, whose own obsession for detail perfectly complemented the impact they were all striving to achieve, they produced 34 emotionally draining -- and dramatically eloquent -- war stories in just under three years. This book collects them all. Settings include: the Roman empire; the Revolutionary War; the American-Indian Wars; the Alamo; the Civil War; World War I (in the trenches and in the air); World War II (in the Pacific and in Europe, including the D-Day invasion); and the Korean War.

"These are not romanticized, boyish ideals of war, but stories that unflinchingly look at the human costs of conflict. Nearly every story is drawn taut (both literally and figuratively), with lots of intense psychological and ironic twists and surprise endings." --Gareth Branwyn - Boing Boing

John Powers Severin (1921-2012; Will Eisner Hall of Fame, 2003), who had a "realistic" comics style, specialized in war, western, and humor comics. One of Mad's founding artists, he worked for with Cracked magazine for forty-five years.

In addition to his pioneering work on the "serious" EC war comics, Harvey Kurtzman (1924-1993) created the all-time greatest satirical comic (with Mad), the most widely-read adult comic strip (with "Little Annie Fanny" in Playboy), and one of the earliest graphic novels (with the 1959 The Jungle Book).

Will Elder (Hall of Fame, 2003) was also known for a 45-year stint with Cracked magazine and for being one of Mad's founding artists.