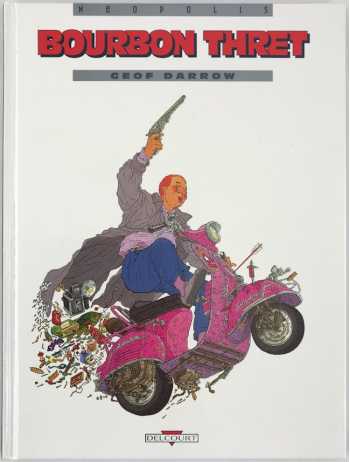 This Geof Darrow album went through one printing in 1995 and was never reprinted.

A collection of three comic stories of the schlubby Caucasian samurai cowboy Bourbon Thret. Two stories appeared in the oversize deluxe edition "Darrow Comics & Stories" (Thret slices and dices his way through a crowded bar to assassinate a holy man, and Thret encounters a whale floating through downtown) published in 1986, but the four-page "Sead" (Thret fishing in the desert lands a big one) did not.

The stories are nearly wordless. Minimal text in French.

Near Fine, issued without dustjacket (mild rubbing to the covers, interior Fine)