Sign in | Register
HomeNew ArrivalsBreathless Homicidal Slime Mutants: The Art of the Paperback 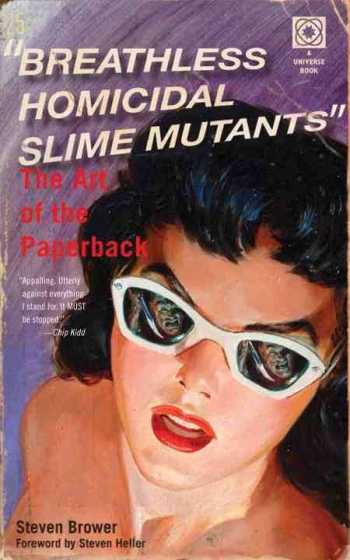 A visually dynamic homage to the paperback.

In 1968, John Leonard, then editor of The New York Times Book Review, listed the many merits of mass-market paperbacks: They can be stuffed in purses, left in buses, dropped in toilets, used as coasters, eaten and thrown away. Their covers can be ripped off! Their spines can be broken! To buy a paperback today is to buy the means of revenging oneself on Western culture.

Fast-forward forty years. Leonard's affectionately flippant assessment may need to be revised as the explosion of digital media threatens the livelihood of the printed word. More than an act of revenge on Western culture, to buy a paperback may be a means of preserving one of its more charismatic--and socially, politically, and aesthetically influential--species. Breathless Homicidal Slime Mutants celebrates the mass-market paperback and gives it its due. A vibrant tour that starts with books from the late nineteenth century up to today, examining the most popular genres--mystery, romance, Westerns, how-to, cooking, and diet, and highbrow literature packaged for the broader audience--it focuses on the history of the art and design of the format and how it is inseparable from the history of American literacy, tastes, and mores of the twentieth century.

Steven Brower teaches conceptual design at the School of Visual Arts in New York City and Kean University in New Jersey. Co-author of Woody Guthrie Artworks, he is the recipient of numerous design awards.

Foreword by Steven Heller, co-chair of the School of Visual Arts MFA Designer as Author program and co-founder of its MFA Design Criticism and MFA Interaction Design programs.

For Steven Brower, the author of Breathless Homicidal Slime Mutants (Universe Publishing) - a book that celebrates the art of the paperback - there is nothing quite like printed matter. This book chronicles the history of the paperback format and highlights the designers behind the tantalizing cover art that became its signature selling point. --Nylon

Packed with worthy representatives from numerous genres, Breathless Homicidal Slime Mutants is a visual and visceral feast that provides a compelling introduction to the history of pop art in the 20th century. --PopMatters.com