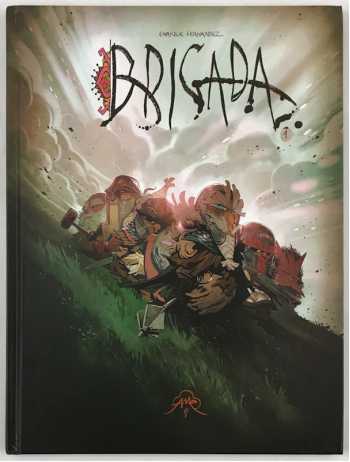 An inscribed copy of the first volume of Enrique Fernandez's crowdfunded graphic novel series, an epic medieval fantasy adventure, independently financed and produced. This is the English language edition (also published in Spanish and French). The complete graphic novel was later collected and published in a smaller size.

For this series, Enrique employs a new art style with a heavier reliance on traditional inked line art than previous albums, digitally enhanced and colored.

The veteran captain Ivvro has been recruited again, to command a hard convicts' squadron in the long war against the black elves. During battle, a mysterious fog traps the squad in a chaotic, strange land. Now they will have to fight another war, for SURVIVAL.

Regrouping and getting back home won't be easy: the strange mist that surrounds them changes everything in its path, making maps impossible. It also brings creatures from other worlds, equally lost and equally focused on survival!

Creatures of all kinds have been trapped in this strange limbo over the centuries.Some of them, like the humans, seem to have adapted well to this environment, creating solid groups of population that the destructive mist seems to respect and leave intact.

The key to survival is the strength of the group. Captain Ivvro faces a difficult challenge, and will need to forge alliances with even his fiercest enemies!