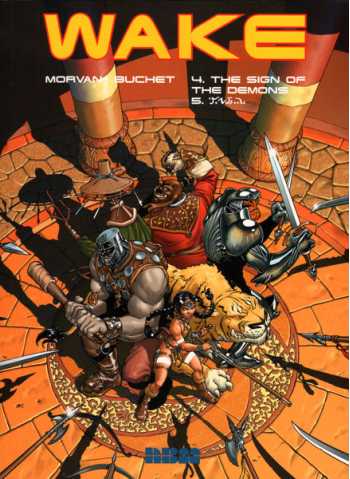 The out-of-print English language edition of fourth and fifth volumes of this best selling Delcourt series. Published at nearly the full French size!

"Inaugurating a new format: 2 stories in one thick book!

In a remarkably poignant and topical story, Navee is pressed into service against a group of terrorists bombing at random throughout Wake! The group is an oppressed neglected people whose anger is beyond cooling but the victims they make are innocent...

In the second story, agents from Wake on mission on Hurumaru, a planet in medieval stage, are giving no sign of life. Navee, Bobo and three other special agents are sent to find them. They arrive in the middle of a war of liberation of the Escots. Lead by Princess Moneva, the rebels are summarily executing all who carry the logo of Wake: the sign of the demons!"