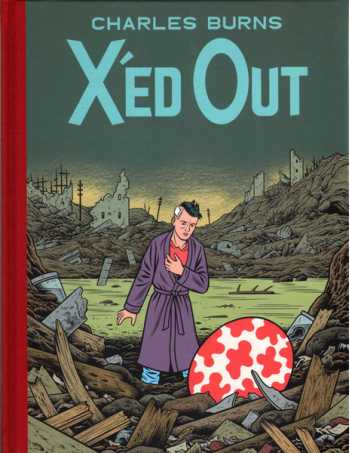 From the creator of Black Hole: the first volume of an epic masterpiece of graphic fiction in brilliant color.

Doug is having a strange night. A weird buzzing noise on the other side of the wall has woken him up, and there, across the room, next to a huge hole torn out of the bricks, sits his beloved cat, Inky. Who died years ago. But who’s nonetheless slinking out through the hole, beckoning Doug to follow.

To say any more would spoil the freaky, Burnsian fun, especially because X’ed Out, unlike Black Hole, has not been previously serialized, and every unnervingly meticulous panel will be more tantalizing than the last . . .

Drawing inspiration from such diverse influences as Hergé and William Burroughs, Charles Burns has given us a dazzling spectral fever-dream—and a comic-book masterpiece.

CHARLES BURNS grew up in Seattle in the 1970s. His work rose to prominence in Art Spiegelman's Raw magazine in the mid-1980s and took off from there, in an extraordinary range of comics and projects, from Iggy Pop album covers to the latest ad campaign for Altoids. In 1992 he designed the sets for Mark Morris's restaging of The Nutcracker (renamed The Hard Nut) at the Brooklyn Academy of Music. He illustrated covers for Time, The New Yorker, and The New York Times Magazine. He was also tapped as the official cover artist for The Believer magazine at its inception in 2003. Black Hole received Eisner, Harvey, and Ignatz awards in 2005. Burns lives in Philadelphia with his wife and two daughters.