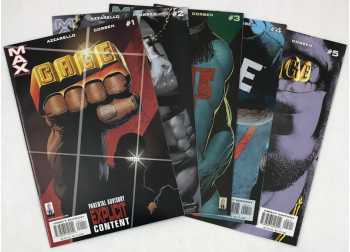 Collected in hardcover in 2002 and softcover in 2003 and long out of print.

When no one else will help, call the...Hero For Hire!

In this neighborhood, you don't need to go looking for trouble. Trouble finds you. Hope Dickens planned to send her daughter to college, but a stray bullet from a drive-by shooting sent her baby girl to the cemetery instead. In this neighborhood, you can't count on the cops. People here have to make their own justice. To set things straight, Hope hires the one man who's always available, for the right price.

Long before a botched prison experiment granted him bulletproof skin and superhuman strength, Luke Cage lived on these brutal streets- and he knows how tough life can be. Even if Hope Dickens can't pay his bill, he's willing to bend the rules a bit. Her dead daughter deserves that much. To get justice, Cage is forced into the crossfire of the three-way turf war among the mob, Lonnie Lincoln's cold-blooded crew, and Clifto's gangbangers. But what better way for Cage to get the job done than to play all three sides against the middle, and get rich off the criminal's cash in the process?

Cage is the latest smash-hit series from the Marvel MAX line. Intended for mature readers, MAX offers a raw, uncensored look at the gritty underbelly of the Marvel Universe. Sometimes violent, but always compelling, Cage is urban action at its street-level best.