Sign in | Register
HomeNew ArrivalsCalvin and the Colonel: The Reincarnation of Amos 'n' Andy 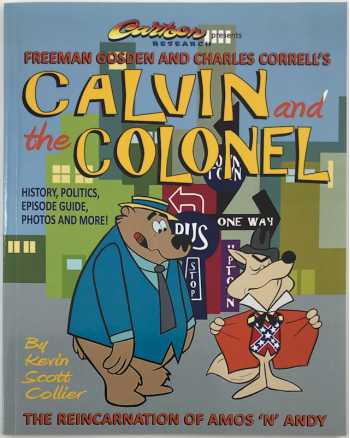 In the fall of 1961, a new cartoon made its primetime network television debut, joining Hanna-Barbera's The Flintstones and Top Cat series. Titled Calvin and the Colonel, it was the creation of Freeman Gosden and Charles Correll, and was produced by Kayro Productions in association with MCA TV/Revue Studios. The new cartoon was anything but new; it was the reincarnation of Gosden and Correll's Amos 'n' Andy radio program. Amos and Andy storywriters Joe Connelly and Bob Mosher, who wrote for the radio show, were brought onboard to repurpose their old scripts for the new cartoon series. While characters Colonel Montgomery J. Klaxon and Calvin T. Burnside were animals, their voices, performed by Gosden and Correll, were identical to the radio's Andy Brown and George "Kingfish" Stevens characters. Explore this unique look at how Calvin and the Colonel became a cartoon, Gosden and Correll's previous 1934 animation venture, and all of the controversy that went with it.