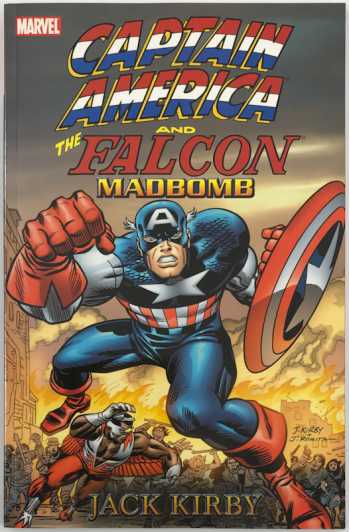 In 1975, when Jack Kirby began working for Marvel again after five years at DC Comics creating the Fourth World, his highest profile assignment was to write and draw the adventures of Captain America, the hero he'd created with Joe Simon in 1940 and revived with Stan Lee in 1964. This is a crazy run of Captain America!

King Kirby was back - and greater than ever! The year was 1975. The great American Bicentennial was fast approaching - but would it be a time for joy, or the moment of this country's greatest danger? In this timeless tale, never before reprinted, Captain America and the Falcon embark on a vast, desperate search for the most malignant conspirators in our history - and their insidious creation: the Madbomb! On the 200th anniversary of the United States, America will die - and only Cap and the Falcon can save it! Plus: Captain America stands alone against an army of underground killers! It's cataclysmic Kirby action in the mind-boggling Marvel manner!