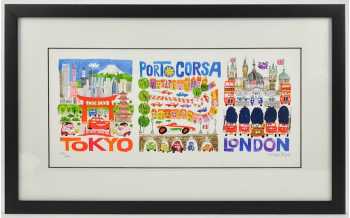 Computers don't make movies. People do: the artists, editors, animators, and technical directors. People are the life behind everything that gets created at Pixar. While animated films are technically complex to make, they each begin with the simplicity of putting pencil to paper.

The Pixar Art Collection is the first time a coordinated assortment of Pixar concept art has been released, celebrating each milestone film release in Pixar's history. The pieces were hand-picked by a select team at Pixar and represent a wide range of media, from marker to pastels to digital creation.