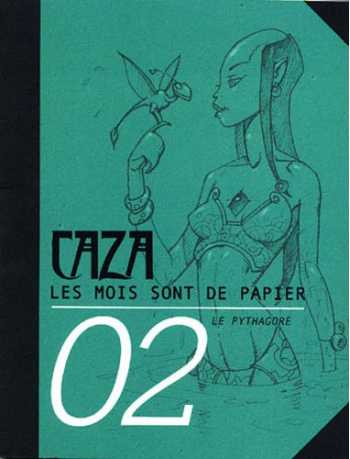 A Caza sketchbook. Unlike the first volume, this volume is 100 pages of preparatory drawings for an animated film "Les Enfants de la Pluie" ("Children of the Rain"). We see the alien humanoid designs but also a plethora of world building: landscapes, creatures, environments, architecture, clothing, hats, sculpture, etc.

"100 pages of preparatory sketches saved with great difficulty from the wastepaper basket. From 1997 to 2002, most of my activity was devoted to the cartoon "The children of the rain", in full complicity with its director Philippe Leclerc. When we got to the end, we ended up with a film in theaters, then on DVD, all fairly successful, which is good ... but also with wheelbarrows of preparatory drawings, ranging from pretty acrylics to pretty filthy sketches dashed on a pad. In fact, there are two stages. The first is when the producer sets up the project, the "pre-production": he needs, in addition to the script, careful drawings, in colors, likely to appeal to the partners involved: co-producers, the production studio, etc. So illustrations of specific moments in the script, staged like shots for the future film...."

Near Fine (only light wear)