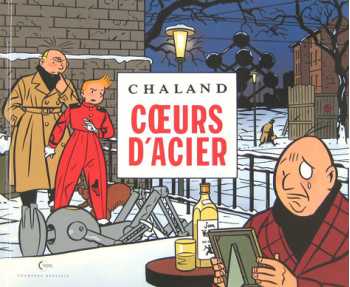 "Nothing could be more fitting in this, Spirou’s seventieth year, than the publication by Champaka of the definitive edition of Coeurs d’acier, Yves Chaland’s signature contribution to the enduring saga of “Spirou et Fantasio”. Here, the creator of “Bob Fish”, “Freddy Lombard” and “Jeune Albert” revisits ´fifties Franco-Belgian bande dessinee and injects its spirit with his modern sensibility. The narrative sweep brings Spirou and his companions from a richly imagined Belgium to an even more fantastic Africa.

"Many of the cliches of nineteen-fifties Europe are exposed by the unique and sometimes uncompromising scalpel of Chaland’s perspective and sharp sense of humour. While his scintillating sense of line carries echoes of Jije and Franquin, his style remains uniquely his own, and is eminently suited to serve the caprices of the red-liveried bellboy.

"Coeurs d’acier, which was published in 1990, was the last of Chaland’s books to be published during his lifetime. It was issued as a special collectors’ edition in a limited print-run of 1,350 numbered and signed copies, all of which were quickly snapped up by enthusiasts. Highly sought after, the 1990 edition was composed of two volumes: the first featuring dichromatic strips and the second presenting a text by Yann with illustrations by Chaland.

"The definitive edition brings together this rich trove in one volume; the material is greatly enhanced by a larger format and, more particularly, by a four-colour process and new colour treatment by Isabelle Beaumenay-Joannet."