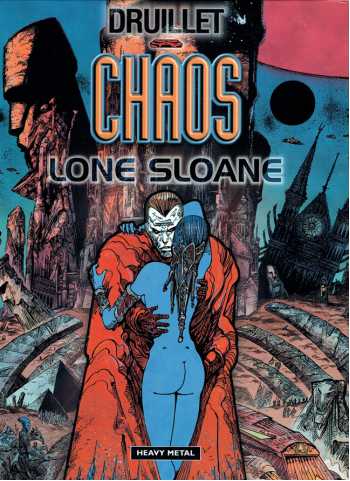 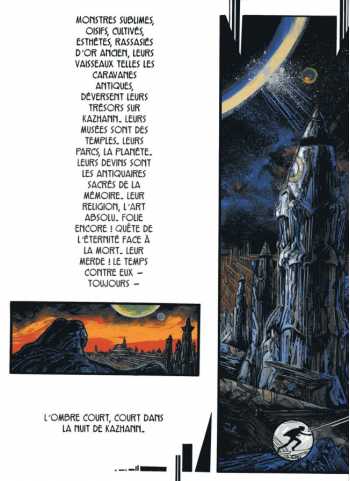 Druillet created Lone Sloane in 1966 and his adventures appeared in Pilote and Heavy Metal thru 1976. Druillet revived the character for three albums in the 1980s before leaving comics in 1986. Chaos in 2000 was Druillet's return to comics and the character, with slashing inks and painted color. It is his last album to date as he concentrates on fine art painting and sculpture.

Watch out: it’s the big comeback of Lone Sloane. And, at the same time, that of its creator, a certain Philippe Druillet. Druillet, throughout his albums, upset the storytelling method of comics. He freed himself from the too narrow frame of the box and the board to compose authentic paintings with disheveled lyricism. The character Sloane, first appeared in 1966, and became famous in 1970 in the pages of the weekly Pilot with The Six Voyages of Lone Sloane. Druillet, the visionary and enthusiastic author, exploded the usual frameworks of the comic strip, giving free rein to its graphic and narrative excess. Before leaving the comics in 1986, exhausted, to better explore other territories. In Chaos, Lone Sloane meets Shaan, his old enemy. The story portrays the eternal conflict between good and evil, in an allegorical narrative carried by a Baroque text. If the staging of the images has been somewhat lessened compared to previous albums, it still retains the mark of Druillet: that of an inventor of forms who has always striven to push the limits of his art. Hardcover collector's edition.