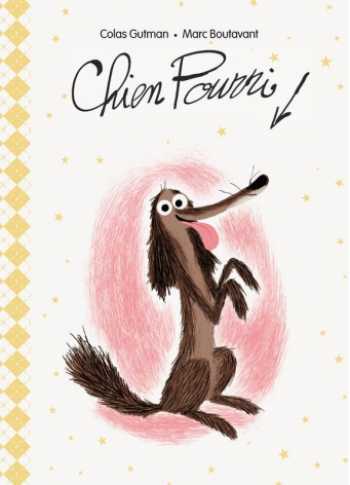 A humorous children's novel about a mangy but lovable dog profusely illustrated in color by Marc Boutavant.

Also known as Mouk, Marc Boutavant's illustration career originally began in comic books. Now, his children's books run the gamut from toddler board books to his hip geography book, Around the World with Mouk. He is also the creator of an animated television show, Mouk, available on Disney Junior UK and YouTube!

His name is Chien Pourri. He smells like sardines, he's covered with fleas, and his coat resembles an old shabby carpet. To make matters worse, he is as stupid as he is ugly.

One day, he decides to in search of a master. He dreams of sugars, ba-balls. He would like so much to belong to someone. For Chien Pourri, despite his faults, also has a heart.

Alas, kind masters are not easy to find, and the vast world is full of traps. Will the rotten dog find the master of his dreams?

In Rose, the heroine read the adventures of Chien Pourri. This "ugly, stupid and stinky" animal is now the hero of a real book.