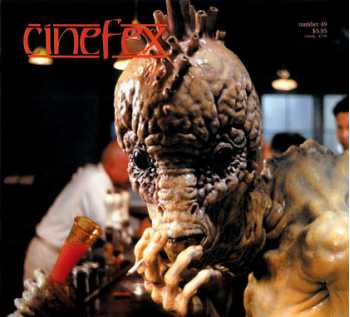 As a youth in his native Toronto, David Cronenberg devoured with relish the iconoclastic prose of beat generation author William S. Burroughs. Thirty years later, he was to write and direct a screen adaptation of Burroughs' most celebrated novel, Naked Lunch. Having populated his bizarre script with a variety of never-before-seen creatures — from emaciated mugwumps to talking insect-typewriters — Cronenberg engaged the effects artisans of Chris Walas Incorporated to breathe life into some of his film's most important characters.

For director Steven Spielberg, Hook fulfilled a seven-year recurring dream to bring the classic story of Peter Pan to the screen for modern audiences. Accompanying the eternal boy — now a grown-up attorney who has lost touch with his youth — back to Neverland were Spielberg regulars including physical effects provider Michael Lantieri and the visual effects artists of Industrial Light & Magic. Surrounded by an army of designers and technicians, Spielberg mounted a $70 million epic destined to be remembered as the most lavish studio production in recent history.

A cataclysmic disaster prompts an unprecedented offering of peace from the Klingon empire. Thematically and time-wise, Star Trek VI: The Undiscovered Country echoed the coincident collapse of the Soviet Union and the demise of series creator Gene Roddenberry. In this atmosphere of significant finality, director Nicholas Meyer — veteran of two previous Star Trek features — marshaled the forces of Industrial Light & Magic and makeup supervisor Michael J. Mills to help realize on film the last mission of Captain James T. Kirk and the crew of the starship Enterprise.