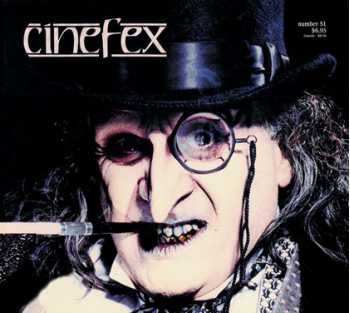 For three years after the record-breaking success of Batman, legions of batfans eagerly awaited the return of their Dark Kinght. With Batman Returns, director Tim Burton — in his inimitably macabre style — was to once again bring the Batman legend to the screen. Like the first film, which had been a monumental production mounted in England, Batman Returns would demand the all-out efforts of a veritable army of filmmaking and effects personnel. For the sequel, the filmmakers would remain on American soil, shooting the live-action on some of the biggest soundstages in Hollywood — with no fewer than eight effects facilities joining the fray. Visual effects supervisor Michael Fink oversaw the complex effects assignment, which included everything from Gotham City miniatures to animatronic penguin puppets to computer generated bats. Key contributors to the project were to come from the celebrated ranks of Boss Film Studios, Matte World, Stetson Visual Services, The Chandler Group, Video Image Associates, Stan Winston Studio, 4-Ward Productions and CG Special Effects.

Near Fine (light bump to bump to top of spine)