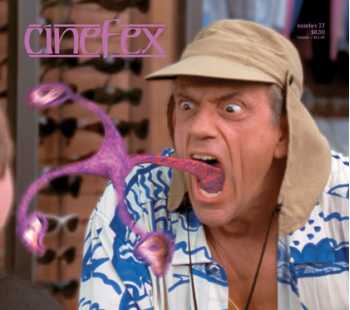 Star Trek: Insurrection, the ninth feature film in the venerable science fiction franchise - with veteran cast member Jonathan Frakes again at the helm - had many familiar elements, including prosthetic makeup effects by Michael Westmore, but employed new technologies and new companies in the creation of its abundant visual effects.
Santa Barbara Studios crafted spaceship shots entirely in the digital realm - a first for the series - while Blue Sky | VIFX contributed a range of predominantly planet-bound illusions.

For his remake of the Boris Karloff horror classic, The Mummy, director Stephen Sommers was determined to present a title character far apart from the bandage-wrapped mummies that lumbered through a variety of decades-old predecessors.
Engaged to design and create the mummy Imhotep as both an all-CG character and a digitally altered live actor, plus devise a host of other fabrications involving fearsome sandstorms and plagues, was visual effects supervisor John Berton and the artists at Industrial Light & Magic.

T-Rex - Back to the Cretaceous: The Five-Terabyte Solution