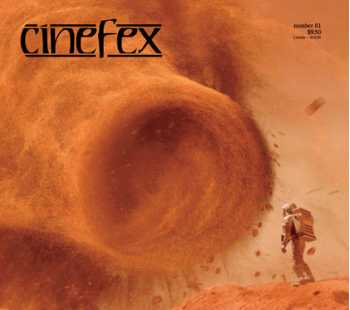 For Mission to Mars, a science fiction film from director Brian De Palma, visual effects teams at Dream Quest Images, Industrial Light & Magic and Tippett Studio used motion control miniatures and a wide range of digital effects to lend dazzling verisimilitude to the cinematic depiction of NASA's first manned mission to the red planet - and the staggering revelations that follow.

End of Days: Days of Fire and Brimstone - Article by Kevin H. Martin

Capitalizing on Y2K doomsday predictions, End of Days dramatizes the biblically prophesied return of Satan to earth on the eve of the millennium.
Working with director Peter Hyams, visual effects supervisor Eric Durst oversaw the efforts of several effects companies to manifest the devil in his true form and dramatize his epic struggle with the one man determined to thwart him.

In an affectionate send-up of the Star Trek franchise and its devoted following, Galaxy Quest tells the tale of a washed-up band of actors who give the performance of their lives in a real-life space adventure.
As lead effects house on the Dean Parisot film, Industrial Light & Magic relied on miniature spaceships and computer generated creatures to enliven the proceedings.

Bicentennial Man: In His Own Image

Pitch Black: Chimera of the Night