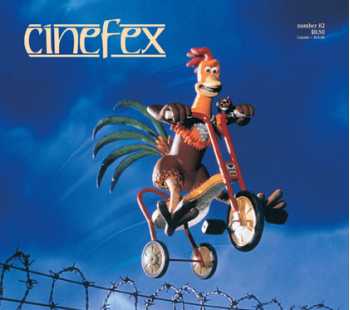 Aardman Animations, of Wallace and Gromit renown, graduated to feature status with Chicken Run, a send-up of The Great Escape, in which a farm's resident chickens hatch a desperate plan to escape being turned into pot pies.
Though the comedy employed Aardman's signature stop-motion puppeteering, it also benefited from a range of digital contributions by Computer Film Company.

The Perfect Storm: Perfecting the Storm - Article by Jody Duncan

A real-life tragedy recounted in the book The Perfect Storm provided the basis for director Wolfgang Petersen's movie of the same name, about a swordfishing boat lost at sea during a storm of unprecedented ferocity.
Raising the bar on CG water effects, Industrial Light & Magic produced the digitally engineered tempest, designed to work in concert with large-scale stage effects by John Frazier.

Gladiator: A Cut Above