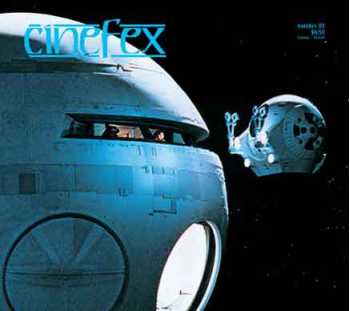 2001: A Space Odyssey: A Time Capsule - Article by Don Shay and Jody Duncan

Still a benchmark by which space films, old and new, are judged, 2001: A Space Odyssey has enthralled science fiction devotees for more than three decades with its purposefully ambiguous take on man's imagined first contact with an extraterrestrial intelligence.

In this, its namesake year, Cinefex pays tribute to this seminal film with a comprehensive retrospective, culled from in-depth interviews with many of its principal technicians and craftsmen - some no longer with us - who were instrumental in bringing legendary director Stanley Kubrick's timeless, profound and startlingly realistic-looking vision of deep space exploration to the screen.

From its inception as a novel and screenplay - a corroborative effort by Kubrick and science fiction maestro Arthur C. Clarke - through its painstaking, often frustrating, four-year-long odyssey, the epic undertaking continually tested the skills and resourcefulness of such innovators as special effects supervisors Douglas Trumbull and Wally Gentleman, production designer Tony Masters, cinematographer John Alcott, makeup artist Stuart Freeborn and others whose recollections form the foundation of this account.

Challenged by Kubrick, ever the perfectionist, all rose to the occasion, exploring countless concepts and approaches, and, in an era long before computers and motion control were endemic to visual effects, devising imaginative and heretofore untried techniques and equipment that would pave the way for future generations of filmmakers.

VG (corner of back cover torn off otherwise NF)