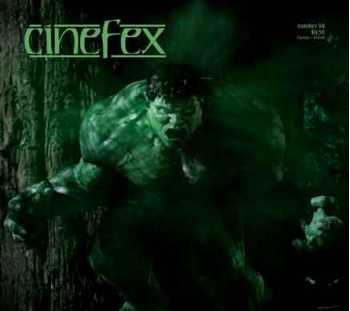 From the pages of Marvel Comics through a popular eighties television series and several movies-of-the-week, the Hulk has endured as one of the most memorable characters of its genre.
However, his big-screen debut in The Hulk, directed by Ang Lee, promises to be his most impressive, thanks to the work of award winning visual effects supervisor Dennis Muren and a team at Industrial Light & Magic, who were charged with bringing the green-skinned behemoth to life as an entirely computer generated character.

The reluctant heroes and singular villains of X-Men, a film based on the popular Marvel Comics series, are back for a return engagement in the sequel, X2: X-Men United - this time accompanied by a new generation of 'X-kids.'
Also returning to the fold was visual effects supervisor Michael L. Fink and many of the original film's effects artisans, who tackled the sequel's more ambitious workload - new and improved looks for returning characters, the fleshing out of new characters and the execution of several spectacular action sequences.

A subterranean odyssey undertaken by terranauts to save the earth from destructive magnetic forces is the focus of The Core, directed by Jon Amiel.
To realize the film's fantastic premise - which included an exploration of the earth's core by the terranauts in an experimental vessel, as well as a series of spectacular natural disturbances that rock the earth's inhabitants above-ground - visual effects supervisor Gregory McMurry relied on an international contingent of effects vendors and a panoply of effects techniques.