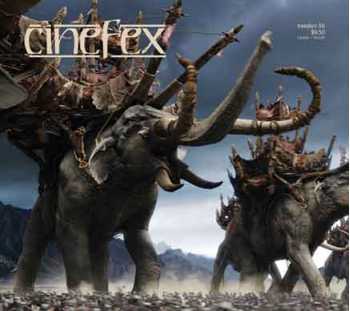 The Lord of the Rings: The Return of the King: Journey's End - Article by Joe Fordham

In The Return of the King, the stirring finale to New Zealand filmmaker Peter Jackson's acclaimed adaptation of J. R. R. Tolkien's The Lord of the Rings, the director pulls out all the stops, bringing the epic fantasy to its long-awaited conclusion. Once again, Jackson's homegrown effects facilities, Weta Digital and Weta Workshop, faced daunting challenges in creating more creatures, more environments and even greater epic battles. Chief among the accomplishments were the depictions of Shelob, Gollum and a host of other fantasy CG characters, the super battle at Pelennor Fields, the majesty of Minas Tirith and the final assault on Mount Doom.

In an exclusive interview, Lord of the Rings director Peter Jackson reflects on the odyssey of the past eight years that has taken him from relative obscurity to world-class status.
Included are insights into Jackson's philosophic and creative choices in adapting Tolkien's material, as well as his approach to the increasingly sophisticated visual effects challenges inherent in the final epic installment.

Master and Commander: Victory at Sea - Article by Jody Duncan

A rousing tale of adventure based on the seafaring novels of Patrick O'Brian, Master and Commander: The Far Side of the World depicts life aboard an early nineteenth-century British sailing vessel navigating the dangerous seas of the Napoleonic era.
Determined to capture the same degree of historically accurate detail as the novels, director Peter Weir called upon visual effects supervisors Nathan McGuinness of Asylum and Stefen Fangmeier of Industrial Light & Magic to oversee visual effects, which were used in combination with full-scale ship replicas and miniatures to recreate two major ship-to-ship battles and a raging storm at sea.

A perennial favorite, Peter Pan has seen many incarnations on both stage and screen during the hundred years since J. M. Barrie first penned his children's tale of perpetual youth in Never Never Land.
In the latest film adaptation, director P. J. Hogan takes advantage of modern visual effects technology to bring a live-action Peter Pan to the screen, heightening the story's magical elements with the use of sophisticated flying rigs by special effects supervisor Clay Pinney and visual effects by artists at Industrial Light & Magic, Digital Domain and Sony Pictures Imageworks, who brought to bear all of their tools and talents in the service of the story's fantasy settings and characters.