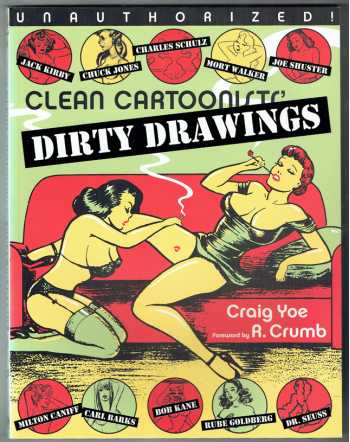 By day their cartoon creations included Mickey Mouse, Superman, Beetle Bailey, Betty and Veronica, Wonder Woman, Batman, Charlie Brown, and the Cat in the Hat. But when night fell, they abandoned their pursuit of heroic deeds and good clean fun to draw the risque -- slinging ink to make kink.

Craig Yoe has been Creative Director and Vice President/General Manager of the Muppets, working closely with Jim Henson. Yoe has six patents for toy inventions, and lectures on creativity all over the world, from Africa to Argentina. He has collaborated with John Updike, Peter Max, Charles Schulz, Stan Lee, and Mike Myers. Yoe is a winner of the Gold Medal from the Society of Illustrators and the Will Eisner Award. Yoe and Clizia Gussoni are co-founders of YOE! Studio, designing everything from toothbrushes to theme park attractions. Yoe's previous 22 books include The Art of Mickey Mouse and Modern Arf.