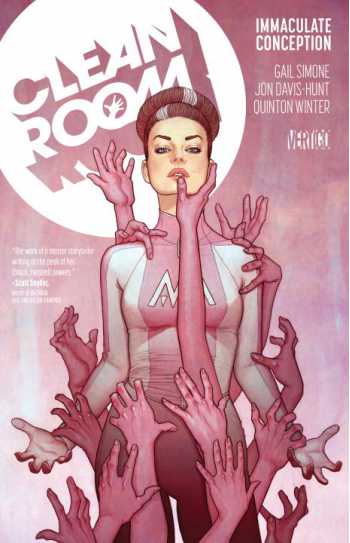 From the minds of superstar writer Gail Simone and gifted artist Jon Davis-Hunt comes CLEAN ROOM VOL. 1: IMMACULATE CONCEPTION--a new vision of horror that takes you inside the locked chambers of sex, science, celebrity, and the supernatural.

Somewhere between the realms of self-help and religion lies the Honest World Foundation. Its creator started out as an obscure writer of disposable horror fiction who decided to change the world--one mind at a time. Now its adherents rule Hollywood while obeying their leader's every command.

That's almost all that anyone knows about the movement--or is it a cult?--founded by reclusive guru Astrid Mueller. But reporter Chloe Pierce is sure that there's something deeper hiding behind Honest World's façade. Her fiancé was a devoted follower of Mueller, right up to the moment that he blew his brains out while holding a copy of her book. Now Chloe wants answers from the woman whose words command the loyalty of millions--and she's ready to storm the top-secret sanctuary known as the Clean Room to get them.

But there's more to Astrid Mueller than Chloe could ever imagine--and the truth that she's about to discover is more astonishing than any of Astrid's accomplishments, and more terrifying than any of her novels.

A multiple award-winning, critically acclaimed writer of comics and animation, Gail Simone began writing as a columnist for comicbookresources.com, producing the comics parody column "You'll All Be Sorry." She has since had fan favorite runs on such books as BATGIRL, WONDER WOMAN, SUPERMAN, SECRET SIX, BIRDS OF PREY and the creator-owned WELCOME TO TRANQUILITY. She currently writes CLEAN ROOM for Vertigo.

"A haunting tale of the lethal power of the human heart--as well as the danger, mystery, and horror that hides just at the edge of sight." --Marjorie M. Liu, creator/writer of Monstress

"Simone creates an effectively eerie atmosphere as well as a intense, compelling antagonism among her characters, making for the beginnings of an absorbing psychological (and maybe supernatural) thriller." --PopMatters