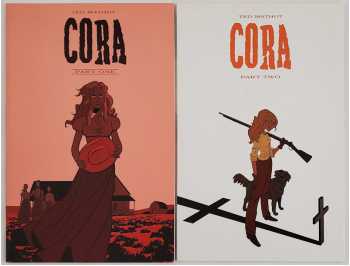 Pixar story supervisor Ted Mathot's self-published sequel to Rose and Isabel. Cora 1 and 2 were the only published issues. It was never finished.

Each issue is signed and dated 2009 by the artist.

CORA is a sequel to the story that started in Rose and Isabel and takes place 18 years later in the American West (1888). Cora is the 18 year old daughter of Isabel Callaghan, whose sister Rose Callaghan has become estranged from the family. Her existence had been kept secret from Cora, until a strange man comes to the door looking for her. Cora, restless with her mundane life on the frontier, sets out on her own to find out more about her mysterious aunt Rose. Anyone who has read Rose and Isabel knows what a dangerous idea this is. Some of the inspiration for the story has come from Joseph Conrad's "Heart of Darkness" and Cormac McCarthy's "Blood Meridian"; people who have read those will have some idea of the tone of the story.

Fine
Each volume signed and dated 2009 by the artist