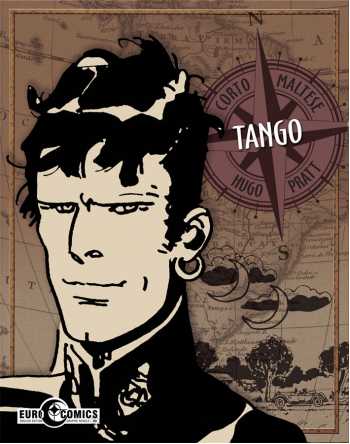 In 1923 Buenos Aires, Corto Maltese investigates the disappearance of his friend Louise Brookszowyc. In his search Corto must play a dangerous game of cat and mouse with an organized crime syndicate known as the "Warsavia," crooked police officials, small-time crooks, investigative journalists, a worldwide prostitution ring, and--manipulating the events from above--the far-reaching arm of the Argentine oligarchy. Guiding his way through this labyrinth of deceit and intrigue is an old acquaintance from their escapades in Patagonia years earlier  Butch Cassidy, the legendary outlaw who with the Sundance Kid headed the notorious Wild Bunch and had been presumed dead for two decades!

Just as Fable of Venice was Pratt's homage to his hometown, Tango is a nod to Buenos Aires, where the cartoonist lived during his earliest creative successes in the late 1940s and 1950s. The atmosphere of the story is steeped in the sensual music of the tango, whose melodies almost seem to emerge from the artwork, with close-ups of the dance steps framed by Pratt with extraordinary effectiveness.